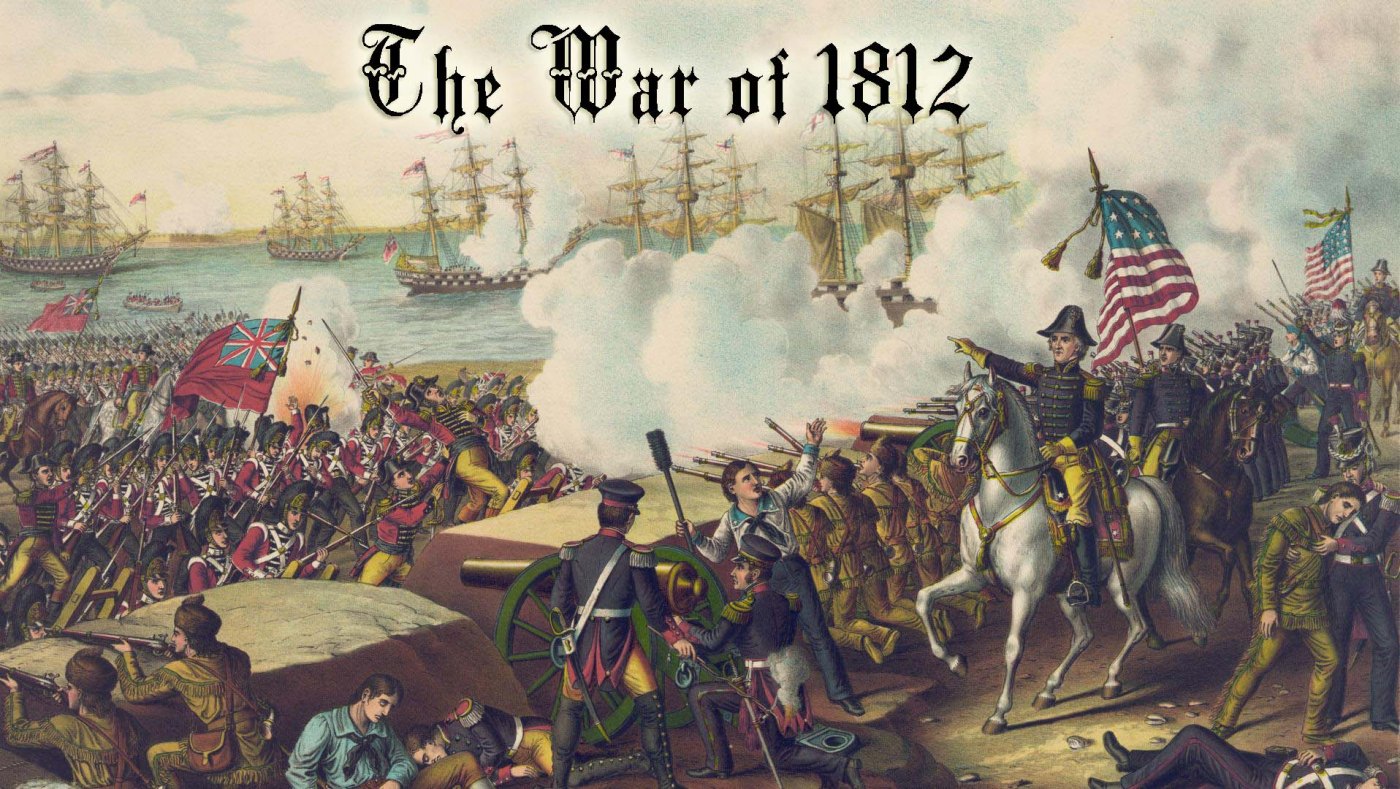 Without devolving the topic into sensationalism for more than a moment, I’d like to talk briefly about *drum roll*… reactions and how they prove the worth of a story. Specifically by talking about the War of 1812.

Stories can almost entirely be measured by the reactions they illicit. This is one of the reasons why anti-Twilight folks have a hard time talking to Twi-hards. The prose of the book, characters, plot, and level of originality all bow before the fact that it was a sensation that swept the nation. Let’s not talk about Twilight. Please. Nothing more needs to be said about that.

As a writer, one of the most incredible things is to either read aloud my words to an audience or watch them read my work. That instant reaction is like a drug to me. A smile? A gasp? A laugh? A tear? All of the above, please. If a story doesn’t make you react, it isn’t a good story. It might be a technical masterpiece, but it lacks heart. How can this be demonstrated? Well…

Let’s talk about the War of 1812 and what we can learn from it. Since the late 1700s, most wars have included a pretty complex and compelling narrative… but not quite so much before this point in history. It went something a little more along the lines of:

England: France is ours.

France: No we’re not.

England: But we have a right to you because of reasons.

Substitute “France” with “Caribbean,” “America,” “Scotland,” and “Ireland,” and you have most British history in the bag. Sometimes there was land or gold or a pope involved.

But the War of 1812… now, that was when things started getting a little hairy. See, any old American history textbook will reflexively inform the reader that the war of 1812 got kicked off because the British Royal Navy was pressing American citizens into service. While that is teeeeeeeeeeeechnically true… everything was more complicated. Americans and Brits looked the same, talked the same (no accent divide yet), and sailed the same. To make things even worse, there was an epic forgery ring which provided thousands of Brits the papers to ‘prove’ they were born in America so they didn’t have to suffer the dismal working conditions and minimal pay for service aboard British military vessels. A couple of British captains lost their tempers, snatched a few Americans for service, and now that’s all America remembers about the war.

At the time, England still believed most of America was kinda theirs. They hadn’t really taken the whole 1776 thing to heart, and were willing to forgive and forget (side note: their tough love in refusing to protect American vessels after the Revolutionary War is what led to the birth of the American Navy and the First Barbary War 1801-1805). America had about enough of that nonsense, and said, “Really, dude, it’s over.” We, as a nation, wanted recognition among the big dogs in Europe. So when the British continued being disrespectful and repeatedly violating our sovereignty, America said… you guessed it… “Fight me.”

It was a horrible idea on our part, really. We had no preparation, no infrastructure, and some really arrogant people in charge. We were going up against the most well-oiled and well-funded war machine in history, and the British had a lot of the American Indians on their side, too. And Canada. We had 17 usable vessels in our navy. They had over 800. We basically lost the land war. THEY LITERALLY BURNED DOWN OUR CAPITOL CITY.

So why, for the love of all history, is the War of 1812 considered a draw? Why would the average American high-schooler coming off a history test tell you that America won?

History books just kinda skate on to the Civil War and don’t say much else, maybe have a little side note about frigates or privateering or something. The War of 1812 during the War of 1812 was a war of intense narrative. Newspapers were becoming a thing and information and intelligence was flying across the Atlantic at unprecedented speeds.

In my opinion, the only saving grace America possessed in the war was her Navy… specifically, the badass, awesome, superhero-like crazy-people she had to captain her naval vessels. That, and the fact that Americans were unscrupulous smugglers and privateers at the time. The American captains (many of whom fought in that First Barbary War, btw) thought outside the box, they had a stunning handful of frigates, and their men were better motivated than those pressed into service for England. With them, and the actions of many private American ships, we were able to significantly slow down British trade in the West Indies and Pacific.

So we come to the point: reaction. The British Royal Navy was the pride of England, the fear of the seas, the… well, you get the point. They were the big cheese. Even Napoleon was scared of the British Navy. They were huge. They were efficient. They had a long history of pounding enemies into the dust or simply outspending them.

When Captain Hull, sailing the USS Constitution, utterly decimated the HMS Gruerriere, all hell broke loose back in England. They were horrified. How could this little upstart of a nation take out a ship-of-the-line from the British Freaking Navy?? 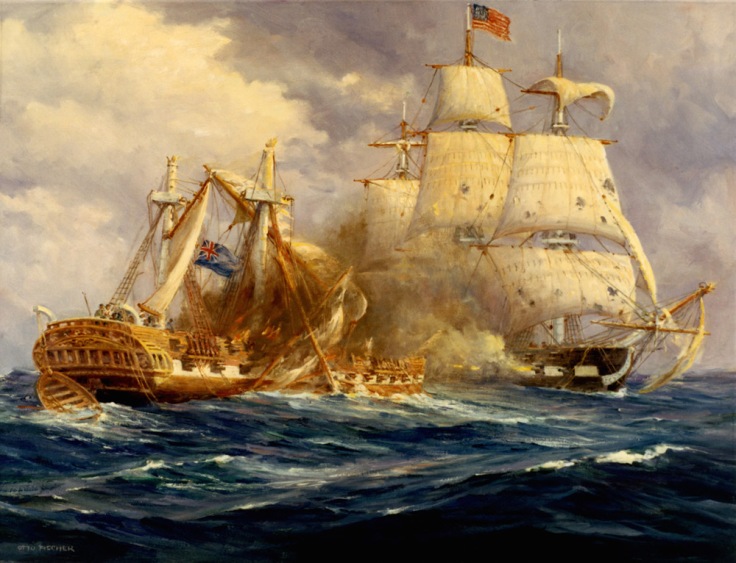 Americans treated the victory like it was the second coming and bragged about it for the rest of the war. The American Navy continued to have success, though never quite topped the utter shock of that first victory. All told, the Brits only managed to take one American ship: the USS Chesapeake. We were irrepressible. Even after Porter was captured in the Pacific and was being taken back to Boston, he managed to escape and get to New York on his own.

And yet after all the noise both sides made about the American Navy, technically, we failed there, too. The British blockaded nearly every single port on the East coast and we were powerless to stop them.

Because we went into the war with a story to tell, a tale that said we were just as important as England or Spain or France and we were willing to go to war to prove it. And we came out the other side of the War of 1812 with our new narrative intact. How?  In the matchup between the USS Constitution and the HMS Gruerriere, there were 101 British casualties and 7 American injuries. Small potatoes compared to pretty much any of the land battles. But the disparity made it a story worth telling, and the way both sides reacted ended up shaping how America became an independent nation in the world.

The British Royal Navy was the beating heart of England’s war machine, and, with her narrative of roguish captains and underdog success, America managed to pluck at it. We declared war out of pride, they declared peace at Ghent, and here we are.

The next time you’re clenching a novel with whitened knuckles or writing another chapter, you probably aren’t dealing with the same stakes of the War of 1812. But it’s all about stories in the end and how they shape our hearts, minds, and lives.

If you are interested in reading more about the War of 1812, I recommend “The Seafarers: The Frigates” by Henry E. Gruppe and “The Weight of Vengeance: The United States, the British Empire, and the War of 1812” by Troy Bickham. I have a few more books on the subject that I have yet to read, but will no doubt manage to bring them up in future conversations.