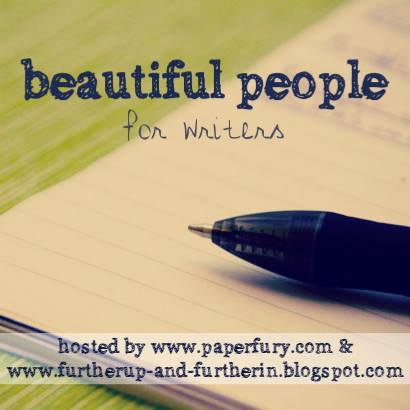 Paper Fury has done it again with another lovely Beautiful People post – even if I was a bit late in getting to it. Just under the wire! Whew! Here’s here meme, for those interested parties: Paperfury.com

How do you decide which project to work on?

Sometimes I pretend like I have a method. I say things like “I want to clear my palate with this funny story before I return to my saga” and then the funny story turns into a five-novel series. Mostly, it’s whichever story is taking up the most brain-space gets the next slot in the writing process.

How long does it usually take you to finish a project?

It depends on the project. The Queen’s Assassin (153K) took NaNo plus one year. The Memories of Godric Dorial (50K) took up one NaNo. The sequel has been taking up my time ever since November, but I haven’t even come /close/ to reaching 50K yet.

Do you have any routines to put you in the writing mood?

Making hot chocolate on the stove… wearing striped socks… not wanting to faint from weariness. That generally puts me in the writing mood.

What time of day do you write best?

Midafternoon to evening. I am not a morning person, in spite of my ability to fake it better than most people I’ve ever met. My brain doesn’t properly kick in until I’ve had lunch. Shhhh! Don’t tell anyone.

Are there any authors you think you have a similar style to?

I’m more prosaic than some, more direct than others. I have a fondness for elegant metaphor but often take the direct route. Basically, I pilfer from anyone I’ve ever read and enjoyed. There’s a little Tolkien, a touch of Louis L’Amour, some Brandon Sanderson, a dash of L.A. Kelly, a pinch of… well… you get the drift.

Why did you start writing, and why do you keep writing?

I was homeschooled and my mother, brother, and I all had a falling out over the grammar course we were supposed to study. She said we could write fiction, she would edit, and hopefully, everything we needed to know would come up. She was right. Now my brother has finished an epic high fantasy novel and I’m well down the rabbit hole of writing for the rest of my life. It’s too addicting, too therapeutic, too much fun… take your pick.

Something I was told to write instead of something I was inspired to write. But, in an attempt to protect sources and methods, that’s all I’ll say about that.

Is there a project you want to tackle someday but you don’t feel ready yet?

All of them, really, but the only way to learn is to do, and so here I am… doing.

What writing goals did you make for 2017 and how are they going?

So many. So much. And horribly. It turns out the family business is a tad understaffed this summer, so all of my brain power is consumed elsewhere and I am slowly descending into the pit of madness with every day I don’t write. I stem the tide when I can. Am I hopeful of regaining sanity? Mmmm. Not particularly.

Describe your writing process in 3 words or a GIF! (or, in my case, AND a GIF)

Live to Serve (the story, that is).