The Wins of The Daughter of the Pirate King: A Book Review

My pixie-in-law and I are back with another one-two sins-wins book review (like our sins and wins for Caraval, by Stephanie Garber), this time for Tricia Levenseller’s The Daughter of the Pirate King.

At this point, it may be evident that my Pixie is excellent at ferreting-out a writer’s indiscretions while I have the ability to put a positive spin on /anything/. It’s one of the reasons why we’re friends. Respective strengths. Someday, I hope to trick her into ‘winning’ a book that I’ll ‘sin’… but that day may be a few centuries away.

Without further ado, here are a few positives you need to know before starting in on The Daughter of the Pirate King:

There are flaws, yes, mainly because stories stand on the equal three legs of World, Character, and Plot. While two of the Daughter of the Pirate King’s legs were quite sturdy, but Levenseller’s World was so flimsy, the whole thing nearly toppled into the sea. For more details on this, I highly recommend my pixie-in-law’s post: here.

I liked this book enough to look up the release date for the sequel as I closed the cover (2018, FYI), and re-read portions to check a few details. All in all, a romping good adventure with a stab-tastic protagonist. If you sail on these siren-infested waters, I wish you a bonne voyage, mon ami. 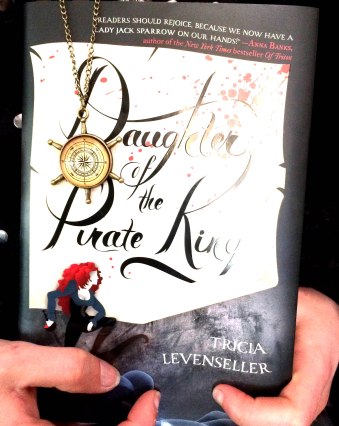 6 thoughts on “The Wins of The Daughter of the Pirate King: A Book Review”

Leave a Reply to The Nomadic Troglodyte Cancel reply