Saturday was over, and Sunday morning dawned gray and foggy on Skye. I had been thrilled to discover that our schedule put us on the winged isle on The Lord’s Day, and immediately began looking up historic churches we would be able to attend.

Anyone who’s ever done even a glimpse of research into Scotland’s history will tell you that the country has had a rocky relationship with religion as a whole, let alone any specific sect of Christianity. There is a younger, more Pentecostal-flavored revival happening in Scotland at the moment, breaking away from the traditional and conservative Free Church of Scotland. However, those who are struggling with the wild abandon of the 21st century are delighted to find order and sense within the latter. My parents and I practice a reformed, conservative Christianity when state-side, and were delighted to experience something with the depth and history of the Free Church of Scotland.

Since we would be seeing the Quiraings among other sights on the upper west wing of Skye, then over to Dunvegan castle, we thought that Portree would be our best bet for church-shopping.

Google offered this image of the church we sought out. 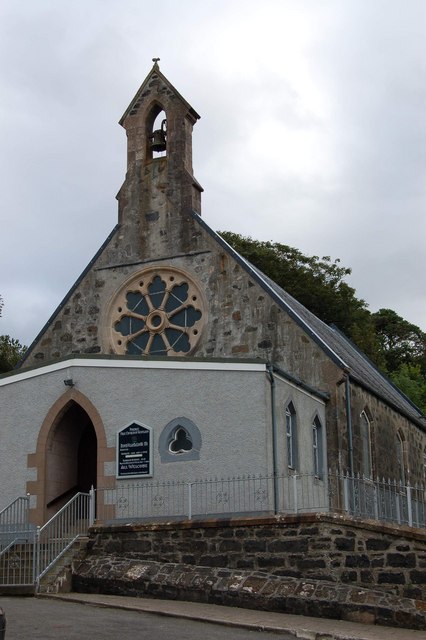 Their website was surprisingly modern, even offering recordings of recent sermons for our perusal.

The congregation was very small (we rounded the crowd out to 20). The service was deeply convicting. The music was acapella madrigals. And we were welcomed like long-lost family. We were called to ‘strive after Christ’ – just imagine those ‘r’s hit with a rough, Scottish emphasis, and you’ll begin to grasp the experience just a little.

The pastor and his wife even invited us to lunch after, but we had to hit the road and continue with the adventure.

So we drove north from Portree, up to the Quiraings, for a nice hike along the top of Skye.

Sadly, it was raining sideways, and the view looked a little something like this. The lovely hike we had enjoyed during our visit to Scotland in 2012 was not going to get a repeat this time around. Oh, well!

The road landed us a little south of the Flora MacDonald monument, so we went up to the Kilmuir Graveyard have a little look-see. I am inordinately fond of graveyards, and my parents were delightfully indulgent of the fact.

Now, for those of you who don’t know, Flora MacDonald was the brave highlander who took it upon herself to smuggle the Bonny Prince away from the British forces who wanted him dead, and the Jacobite rebellion stopped once and for all.

After the failure of the ’45 Rising, the Bonny Prince was chased through the highlands, hiding in the moors from the British forces and seeking refuge from those still loyal to him. He was helped time and again. Not one of the poor Scottish Highlanders betrayed him for the offered £30,000. Eventually, Flora agreed to sneak him from the mainland to Skye, and he did so dressed as her maid. From Skye he was able to escape to France on the privateer ship L’Heureux. He never returned to Scotland.

After the drizzly, but interesting, visit to the graveyard, the weather started to clear up. Our drive turned from bleak to delightful as we turned south and drove over to the next stage in our Scottish adventure. We were walking on clouds, Skye under our feet and rain in our hair.