After we stayed with friends north of Inverness, we drove south through the Cairngorms and hit up a different set of friends from whom we could bum a night’s stay. They’re busy building a house and re-building an old barn out in the country. While we were driving in, I noticed a peculiar square tower perched on the surrounding hill. We all commented on it and speculated as to its age, purpose, and structural integrity.

When I asked our friends, they proposed a hike up to see it since we would have juuuuuuuust enough light to do so before we drove to their fully-furnished house for dinner and a warm bed. We hiked up through the woods (which were lovely, dark, and deep, by the way, very English poetry) alongside a chuckling brook.

We passed picturesque sheep grazing on picturesque grass on a hill over a valley filled with picturesque Scottish houses. At the very top was the observatory.

It was built in 1766 by an amateur astronomer named James Stuart-Mackenzie. It is 20 ft tall (6 metres, for my U.K. peoples out there) and currently hollow with no roof or windows. This vacancy only adds to the mystery and hauntedness of the structure.

According to legend, a local poacher named David Gray lost his life due to Kilpurnie, and all because of a £100 bet. The story goes that he was there, alone, with no food or water, for either 7 years or a year and one day – either way it was too long. 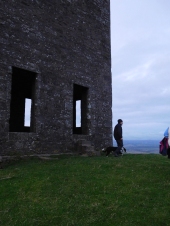 Because he won the wager even though it destroyed him.

According to this site: “…But by the time he was released he was in a desperately frail state. All those who came to witness his victory were shocked to see that his hair was now waist-length and grey, and his fingernails were so long that they were like a bird’s talons. He appeared to have prematurely aged and, most dreadful of all, he had lost the power of speech and was only capable of grunting.” After which he was given into the care of local doctors, 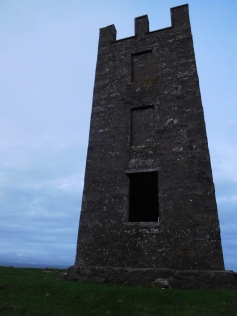 I stood in that very tower. I heard the empty wind whistle through the cold walls. It wouldn’t take much to imagine the phantoms which would emerge to haunt this poor man. No one knows if David Gray really existed, or how long he spent in that tower by himself.

It wasn’t hard to picture a tragic history to the empty tower, but I had no idea that there was a genuine Tragic Legend TM attached to it. Scotland is full of tragic stories, but all old lands are if you know where to look. 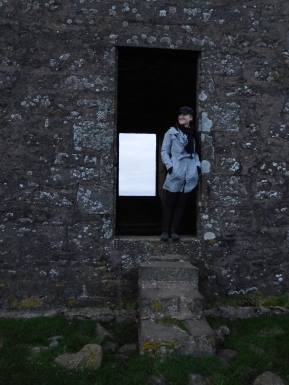 2 thoughts on “Hermit of Kilpurnie Tower”